Another year passes for Iron Shepherds and plenty has happened over it; from new displays to new events and exciting opportunities!

Our second year started off at a leisurely pace with our first event being another winter fair at Abbey Mill Cafe. We had a small camp set up where we spent the day preparing food, showing some crafts and generally trying to keep warm! It may look realitivly warm in the picture but it was a typical freezing winters day. Luckily we did have the fire to sit by and warm us up but our feet did get a little numb. Even so it was a great little day and a wonderful start to our second year before going on a little break. 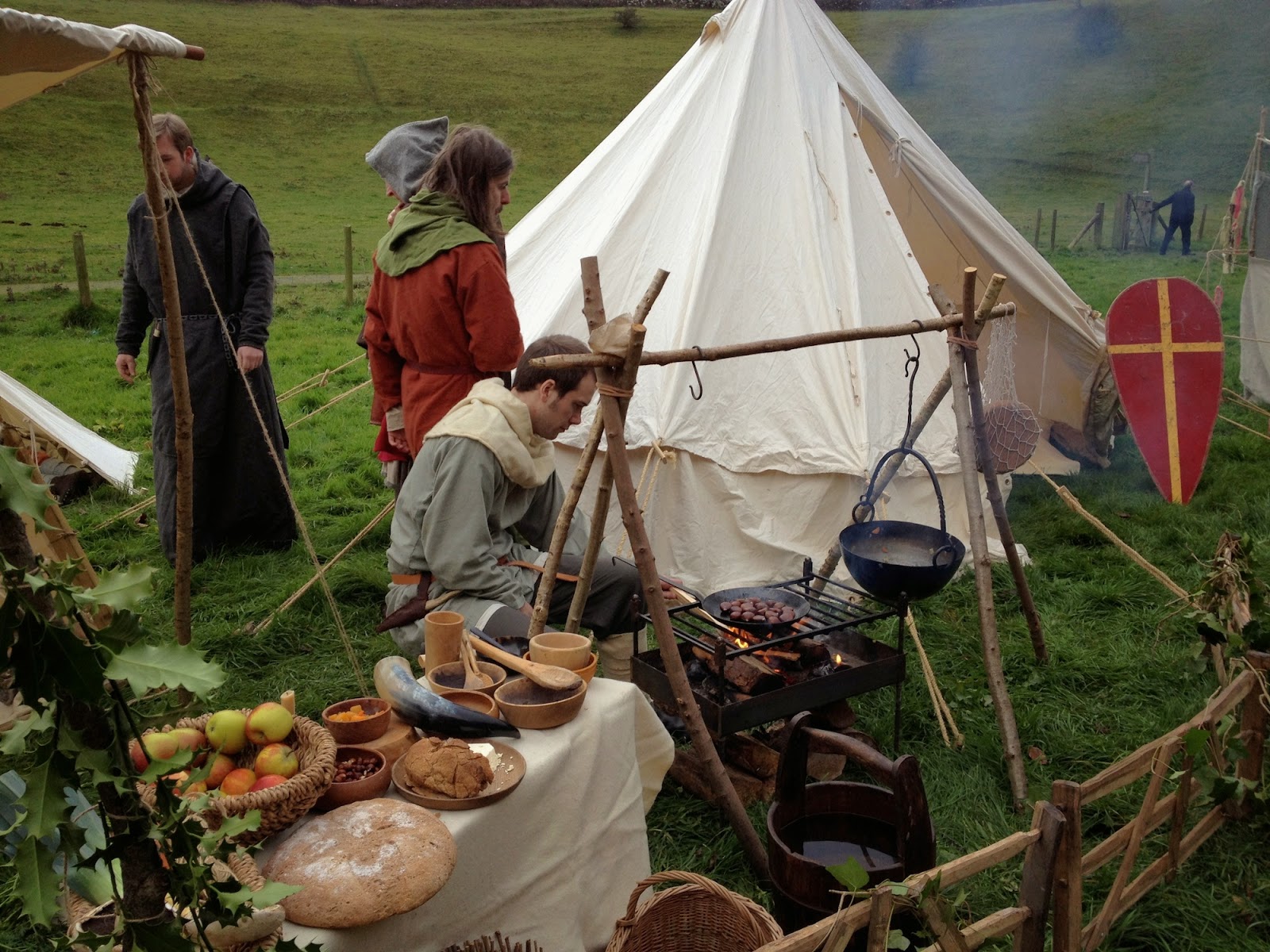 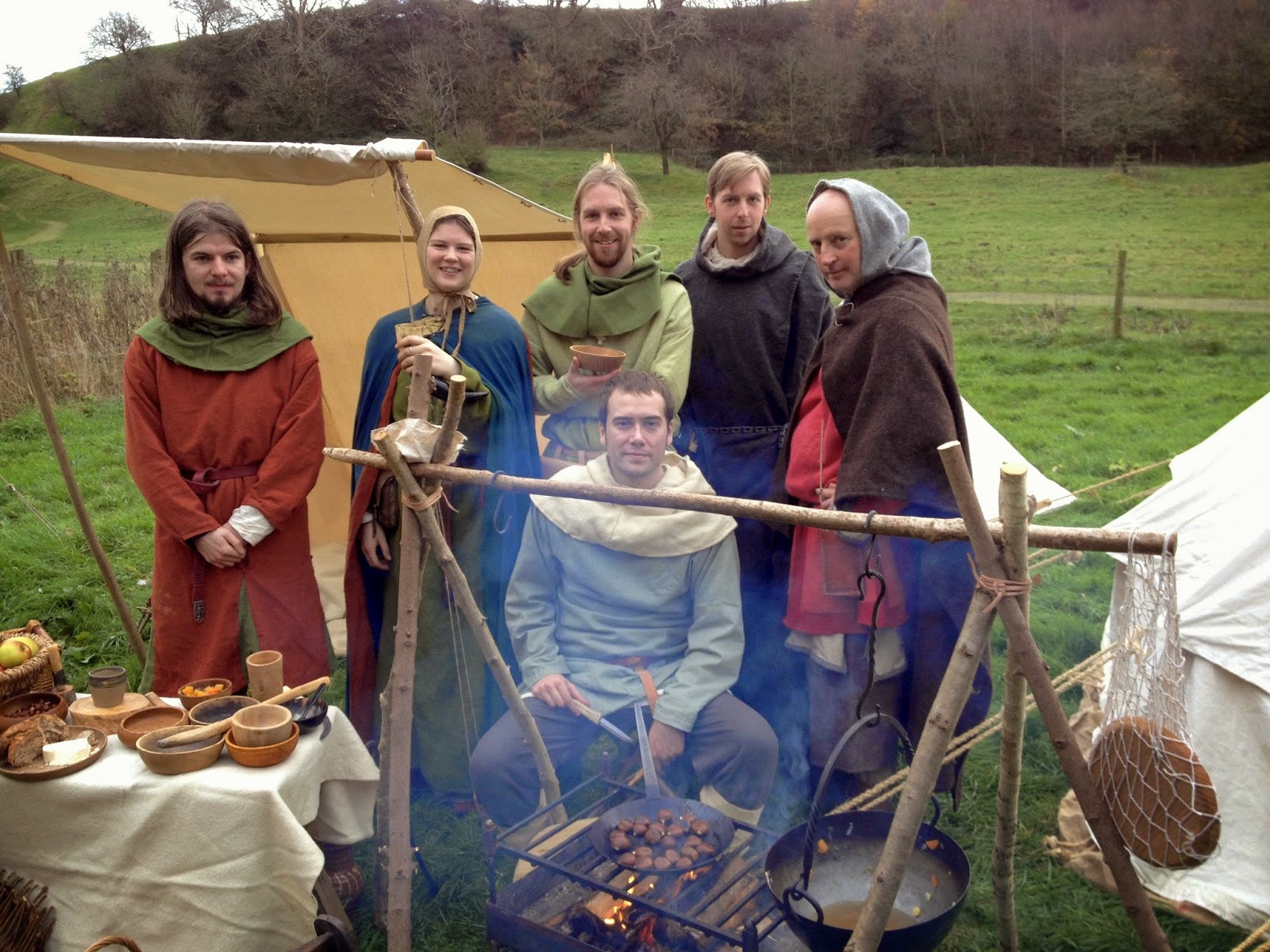 Following the winter fair we went on a break from events for the rest of the winter while we gathered ideas and worked on the summer to come! 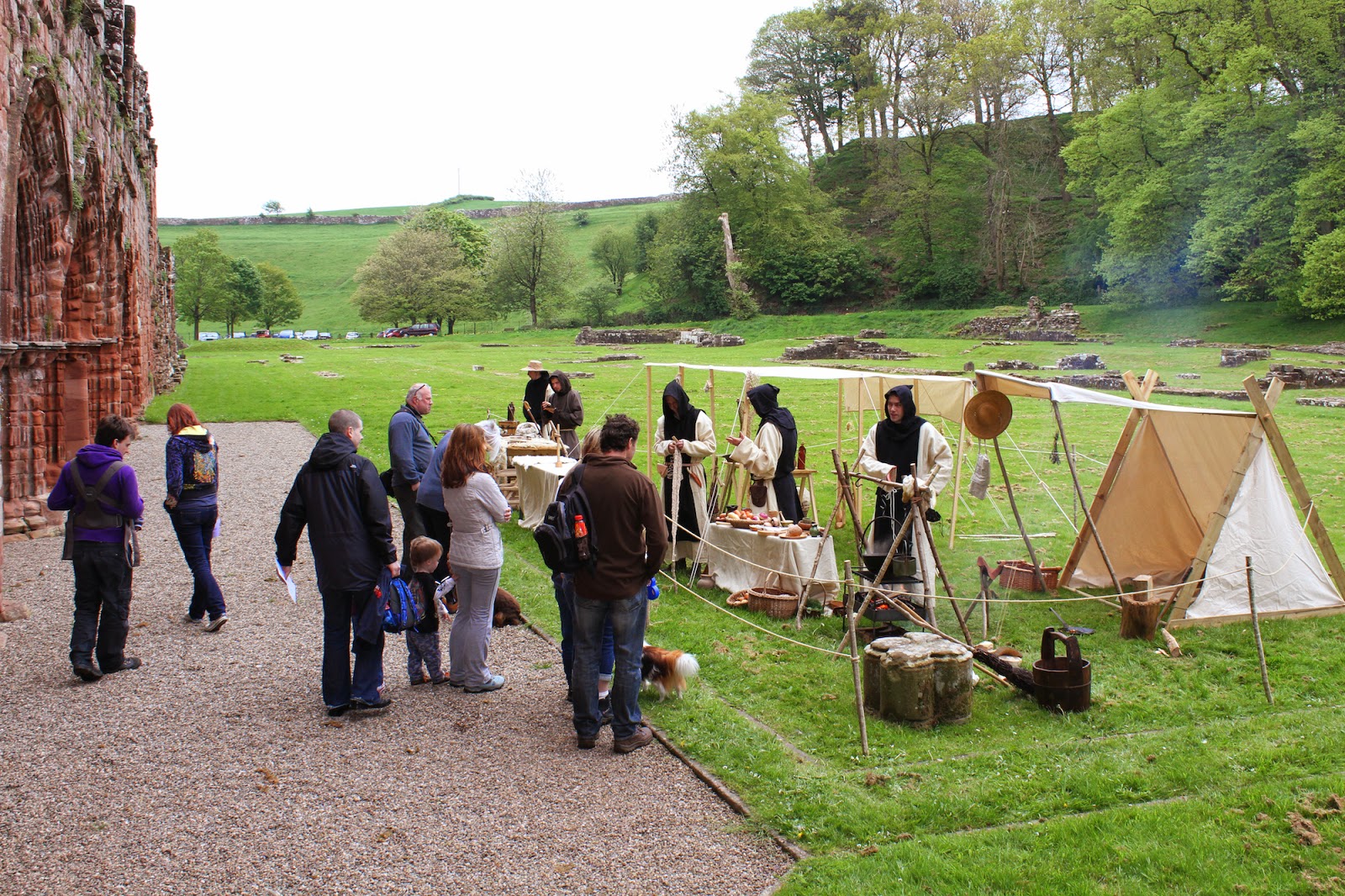 Brand new for 2014 Iron Shepherds introduced our Monks Life Display, a display tailor made to showcase different aspects of a monks everyday life from when they got up, to what they ate and what chores they had. The setting for our first Monks Life event was amongst the beautiful ruins of Furness Abbey. Sat in the cloister range we had a small display which had Brother Bertram demonstrating and talking about cooking, Brother Oswald net making, Brother Orm Tethera discussing everyday life, Brother Fulk giving insight into the lay brothers and Brother Ralph informing about surgery and health. The day saw a fair number of people coming to see us and learn about the Monks of Furness Abbey in an interesting and visually engaging way! 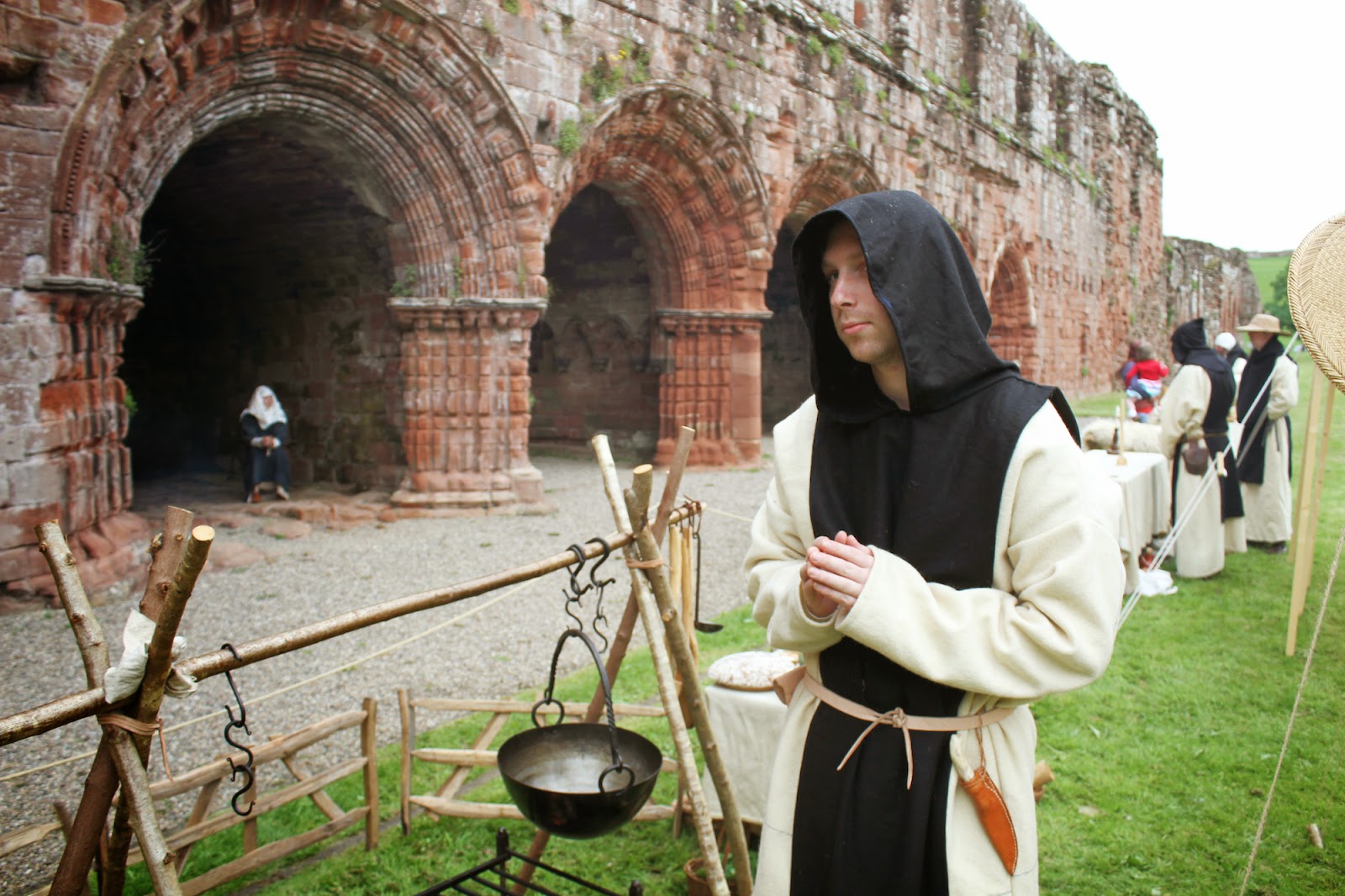 A few weeks after our first Monks Life event we were asked to do it again at Furness Abbey to coincide with some shuttle buses that were running on the 24th between the Abbey and the Dock Museum in Barrow. It was the perfect time to have a little extra going on in the ruins so we jumped at the chance to go down and set up our display again. This time, along with the original Brothers, we had a visiting Nun, Sister Æowyn and Brother Mellitus joined us to display ink making. The day was wonderful and we had lots of visitors from the shuttle buses as well as general tourists! 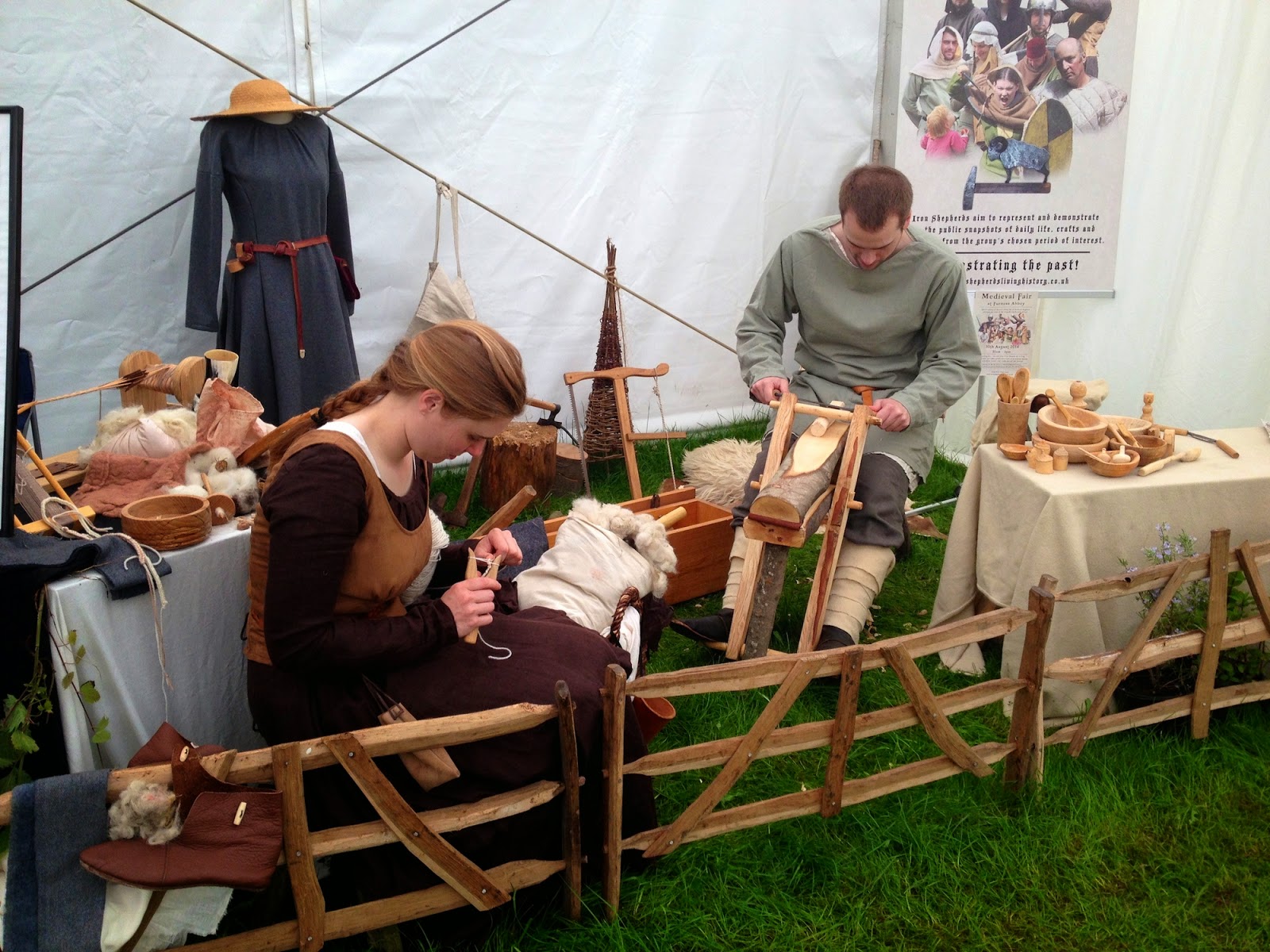 At the end of May we had the opportunity to have a small display at the Holker Garden Festival, and opportunity we jumped at! We had a small area to set up in to advertise ourselves so Bertram, Anna and Brother Orm Tethera headed up to the Festival to demonstrated some crafts, wares and entertain the crowds. We had lots of interest and positive feedback which was a real boost on the long hot days! We were in a tent which made it extra warm! 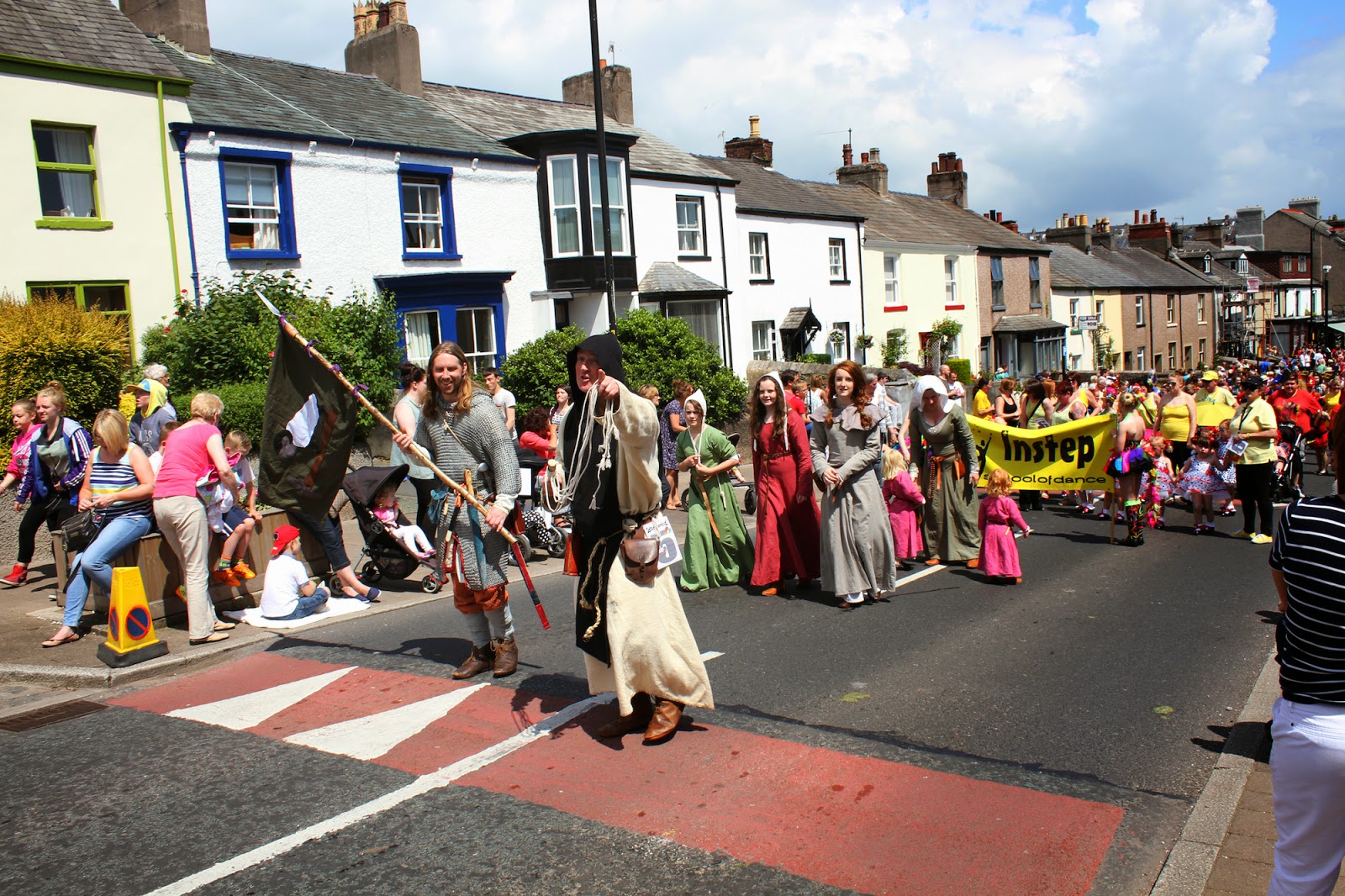 A different sort of event for us this. We had been asked to be involved in the 2014 Dalton Carnival so that the carnival theme could be Medieval. We were happy to be involved and on the 14th we set up camp on Dowdales School field and then some of us went off to be in the parade! Brother Orm Tethera was joined by Oswald, Aelswyth and family to lead the parade through the streets of Dalton. Brother Tethera had quite a lot of fun engaging with the onlooking crowds! After the parade we performed our weapons display before everyone rejoined the camp to show off our crafts. It was a nice little day with masses of people enjoying the festivities. We had quite a fair amount come over and talk to us which made the day pass well.


The end of June came and we had been invited to have a display at the Gleaston Family Fun day. The event lasted 4 hours from 12pm and we were there with our Anglo Norman camp to do what we do best, display crafts and engage with the public! We had a great day and spoke to many people who all showed an interest in what we had on show. Throughout the afternoon bowls were turned, nets were made and stone was carved!

Here we are again, back for one of our big shows of the year at Muncaster Castle Living History Week! We set up camp for two days of education, entertainment and medieval fun and it was a real success!

Hundreds of people flocked in over the two days and wandered our camp asking questions, listening to explanations and enjoying the atmosphere of Anglo Norman life. We had many positive comments about what we were doing which really made the days worth while. The crowds for our weapons displays were a bonus too!

On our first evening at Muncaster, as we set up camp, we did a time-lapse video to show in speedy fashion how we erect our camp. It's certainly a fun little watch-

30th of August and it's time for another of our biggest events of the Summer, the Medieval Fair at Furness Abbey! And it didn't disappoint!

10am and the doors opened on the second ever Medieval Fair. Camp had been set up the night before and we were all up and ready for the public who soon arrived in their droves. There was a steady flow of people through out the day, walking through camp, chatting to us about our crafts and life in Anglo Norman Furness. We also performed our weapons display 3 times through the day to large crowds enlightening them to what weapons were used in the time as well as entertaining them with some brawls.

While at the Abbey fair we also filmed another time-lapse video! This video was taken throughout the whole day, from 10am until about 6.30pm, and gives an idea of the numbers of people who flocked to the event and came through our camp! 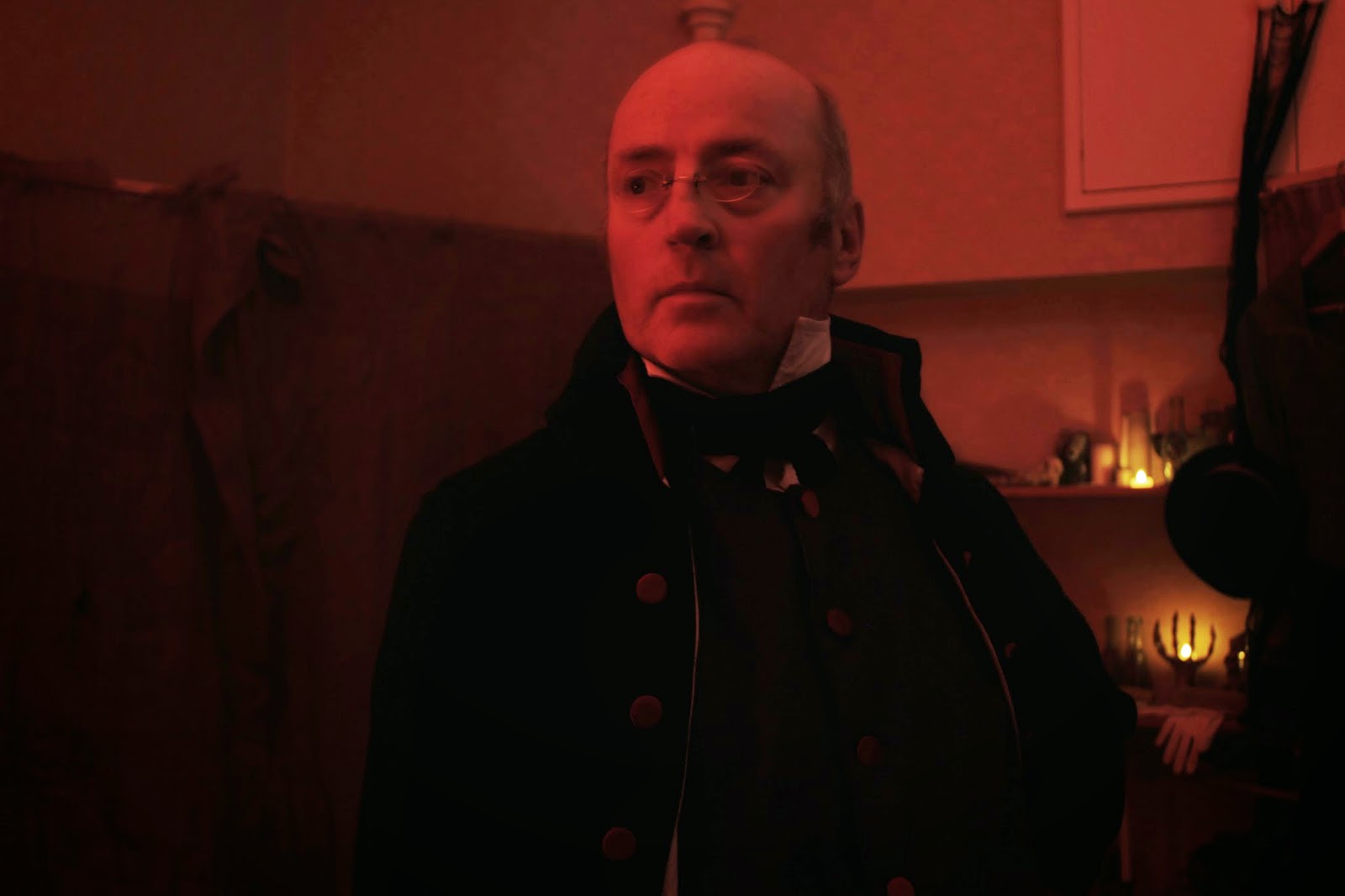 And so arrives our final event of the year for us, a brand new venture created specially for Halloween; our Victorian Room of Curio! Showcased for the first time at Wray Castle during their halloween celebrations the idea was devised as a way to engage the public by telling them local stories and legends while also entertaining them with a couple of scares along the way. We had timed entry to the room throughout the two days where Curio Master, Dalton Mills, would take people round. We were booked up for all our entries with 160 people, young and old, entering the room over the time. Everyone left the room happy, entertained and a little bit scared and we received some really positive comments! Dalton Mills was certainly pleased with the reactions to his stories and curiosities.

It has been a fantastic year for us with so many new and exciting events as well as returning to some of our favourites. Thank you to all who have supported us, booked us and come to see us this past year. We have had a great time and are extremely excited to see what the next year brings, we certainly have some interesting ideas ...

If you would like to keep up to date with what the Iron Shepherds are doing then why not follow us on Facebook or Twitter  You can also check out our website to discover what we do and what we have coming up.