The years that followed the Norman invasion of England in 1066 were, to say the least, turbulent.

William the Conqueror started his reign as King of England by building a large amount of castles, motte and bailey castles to be precise. These were symbols of power, showing all of England and its people who was the new man in town, the boss, the leader! He also would hit back fast and hard against anyone who threatened him and his right to the crown and most especially any rebellions.
One major event which took place early in his reign was the event known as the Harrying of the North. 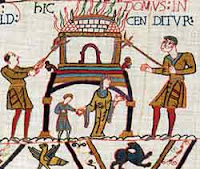 In the winter of 1069–70 William undertook a series of campaigns to subjugate Northern England and break the rebellious state of Yorkshire. A man named Edgar Atheling who was the last Wessex claimant encouraged the Anglo-Danish population of Yorkshire to rebel which broke the Norman hold on the North. Williams first port of call was to pay the Danish to go home, which they did, but the remaining English continued to rebel and refused to fight William on the battlefield.

To defeat the rebels the King decided to starve them out by laying waste to the states, or shires, in the North before putting Norman aristocracy in the area. Towns were burnt to the ground and looted. Animals were slaughtered and fields destroyed causing large scale famine.

Orderic Vitalis, an Anglo-Norman chronicler, wrote the following about the Harrying some fifty years after the event:

"The King stopped at nothing to hunt his enemies. He cut down many people and destroyed homes and land. Nowhere else had he shown such cruelty. This made a real change.

To his shame, William made no effort to control his fury, punishing the innocent with the guilty. He ordered that crops and herds, tools and food be burned to ashes. More than 100,000 people perished of starvation.

I have often praised William in this book, but I can say nothing good about this brutal slaughter. God will punish him."

It is obvious that the actions of King William were brutal and callous, many now perceive his actions as genocide and it's clear to see why. The extent of ruthless murder and shameless destruction is on par with some of the biggest of later genocides. Quite why William thought this was the only option to stop the rebellious shires is any ones guess. It is obvious he wanted to show his power but why he needed to cause so much destruction and have quite so much blood shed is unclear. It certainly makes you glad to be alive today and not back in those turbulent times.


Following the Harrying any Saxon earls still left were swiftly replaced with Norman lords who could assert their laws and beliefs on the local people. They built many castles from which to rule and set about bringing the Saxons in to line. This saw the start of the Normanisation of Northern England as well as the rest of the country. Soon the Saxons were converting to the Norman way of living and obeying the new Norman laws.

This was the same in Furness, although it did take a fair bit longer for the area to become truly Norman, if it ever really did...


This year marks the 950th anniversary of the great Norman invasion of England and we at Iron Shepherds are celebrating with this series of blog posts, a brand new weapons display and several events with our Norman encampment!

Our main period of interest is the 1140's, a period of time within the Norman rule of Britain. We have an Anglo-Norman camp which we set up at various events throughout the Summer months. You can next see us and experience Norman life at the Apple Day at Ford Park, Ulverston on 1st October, 11am - 4pm.

Email ThisBlogThis!Share to TwitterShare to FacebookShare to Pinterest
Labels: 1066, 11th Century, 12th Century, Harrowing of the North, Norman Take Over, Normans, The Take Over, William the Conqueror, Year of the Normans
Newer Posts Older Posts Home
Subscribe to: Posts (Atom)