1066, the Year of the Normans: NORMANS IN FURNESS

Following the invasion by the Normans in 1066 Furness and what is now South Cumbria was left pretty much alone, free of Norman influence with little rule and a mix of varying cultures.

The area had many Norse men (people of Viking descent), Celts and Saxons which provided an eclectic mix of cultures which must have made the area pretty unique. There was little to no Norman influence in the early years after 1066, the Domesday book of 1086 lists Earl Tostig as the lord of the area but this was not true as we know that Tostig was killed in September of 1066 at the battle of Stamford bridge in Yorkshire, just before the Norman invasion. This strongly suggests that the accounts of the Furness area in the Domesday book was actually a copy of an early, similar, document. This also shows how little the Normans had to do with the area, so little that they had no one to undertake the survey in the area and no one who could be bothered, or could face, travelling to the peninsula. At the time the area was known as the Manor of Hougun, Hougun is believed to derive from the Old Norse word haugr meaning hill or mound.

It was not until the early 12th Century, around 1107, that Furness gained its first Norman lord!


Michael Le Fleming, a Norman lord, was granted the lands lying eastward of Abbey Beck and southwards of the moors of Birkrigg and Swarthmoor by the then King, Henry I. This land became the Manor of Aldingham. Between 1107 and 1111 Michael set about building a brand new Motte and Bailey castle. Something the area had never seen. With this new castle Michael could then rule over Aldingham and start to bring some Norman law into the peninsula. (Find out more about this motte and bailey caste over at Furness Hidden Heritage with their blog post A Motte Without a Bailey and a Manor Without a Town) The rest of the "forest of Furness and Walney" was given by King Henry I to his nephew Stephen, Count of Boulogne and Mortain (later King of England).

Some 20 years after Michael Le Fleming moving to the area another, greater, Norman influence was set to arrive, an abbey!


In 1123 some monks from the Order of Savigny, a French Catholic order, were granted lands at Tulceth near Preston. For some, unknown, reason the monks did not stay here for long, never really setting up a monastery as in 1127 they were granted land in the valley of Beckansgill in Furness by Stephen, Count of Boulogne. At this point the monks moved swiftly to their new lands and set about building a large, decorative, abbey in the valley floor. It is most likely that the reason for the move here was to bring another Norman influence to the peninsula and in turn bring further Norman rule. The lands of Furness needed to be controlled and needed to be brought in line with the Norman way or it could easily become a rebellious, rogue state.
﻿
﻿﻿ 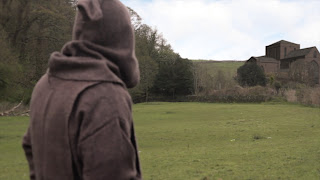 The new abbey soon started to take hold. They owned much of the land near by so allowed the locals to farm it for a tithe, a small part of the produce, and they gained strong links with the community, especially at Dalton, the largest town in the area at the time and the only one that had continued to farm following the Harrying of the North. The Abbots of Furness became the lords of Dalton and ruled over it. The abbey also gained strong links with the Isle of Man and the strong Norse culture which lived there. In 1134 the King of Man, Olaf I, granted the abbey the right to appoint the Bishop of the Isles. A rare and remarkable privilege!

It was later in 1147 that the Cistercian order of monks took over at Furness Abbey and they took it on to become the second richest Cistercain house in the country!

It is worth noting that during the Norman period of history Furness was not always part of England!

In 1136 Stephen, now King of England, gave the entirety of Cumberland including Furness to Scotland. This was no-doubt a consiquence of the civil war between himself and Empress Matilda known as the Anarchy. Stephen giving away Cumberland was probably a way of keeping the Scottish happy and keeping them from making any trouble while the Anarchy was being fought. This didn't mean that the area was now ruled by Scotland though, there was no really rule from either Country. The Scots still raided the area and the English had nothing much to do with it. It also didn't mean that the Norman influence left the area, far from it. The abbey continued to grow in power and wealth and the motte and bailey at Aldingham still stood. Eventually Cumberland would be taken back by England, in 1157, following the end of the Anarchy.


In 1160, just after Furness is reclaimed back by England, Gamel de Pennington, a local lord living in Pennington, founded a hospital at Conishead for the poor of the Ulverston area. Augustinian Monks ran the hospital and lived within it. They also founded a school to help educate local children and later, in 1188, the hospital was raised to the status of a Priory. Another Norman institution in the area again helping to Normanise and educate the local inhabitants.

These small steps continued to happen across Furness making the area ever more Norman but it is debatable as to whether Furness ever did truly become Norman. The people of the area were certainly not Norman, they remained a mix of different origins and no-doubt had varying belief systems for many centuries.

Still the Normans had a stronger and stronger presence here and they certainly ruled over the area and tried to bring it under the Norman rule.


This year marks the 950th anniversary of the great Norman invasion of England and we at Iron Shepherds have been celebrating with this series of blog posts, a brand new weapons display and several events with our Norman encampment!

Our main period of interest is the 1140's, a period of time within the Norman rule of Britain.
Posted by Iron Shepherds at 10:00 No comments: