And yet another year passes for Iron Shepherds Living History and boy has it been a good one! With new displays, events and members 2015 has been our best year yet and we wanted to share what we've done with you here.

Our third year started relatively quietly this year, we had done Winter fairs the last two but this time we decided it best to forgo organising such events and concentrate on preparing new things for the coming season. Having said that we did get invited to a photo shoot ...


In January the Barrow Digital Photography Club invited us to take part in one of their photo shoots. We accepted the invitation and went along for an evening of photo taking. We must have had hundreds if not thousands of photos snapped of us and it was a great evening! You can check out a video from the night bellow. 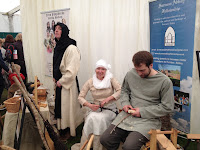 In May we had our first event of the year, Holker Garden Show. We attended in 2014 along side English Heritage and Furness Abbey Fellowship and this year English Heritage asked us to return with them to put on a small display. We were there for two days, the first had Bertram, Brother Orme Tethera and new member Matilda, the basket maker, display to the public. We had may interested passers by and we promoted our brand new up coming event.

The 6th of May saw the start of a brand new event created by Iron Shepherds, Life in the Past. 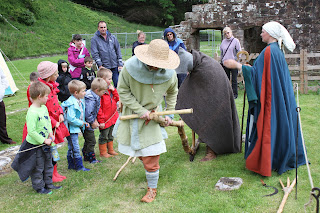 Life in the Past had been planned and worked on throughout the winter and was set to be a two day event showcasing life in the past at and around Furness Abbey. Day one was meet the 12th century peasants to find out what life was like living in Furness and what it was like farming the land on a daily basis to produce food not only for yourself but for the Abbey.

We had two new specially written displays on the day: a farming talk written by one of our members Karen (aka Heather), which showcased farming in the 12th century and how tough yet vital it was, and a mummers play written by Paul (aka Toadflax) which was a type of play common in the time to poke fun at establishments as well as to entertain. Both displays went down well and have become part of our growing repertoire.

The 7th was the second day of Life in the Past and this time we were 13th Century Monks for the day! 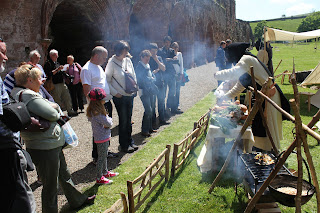 Following the success of last years Monks Life displays we wanted to include monks in our new event so our second day was dedicated to them and how they lived in Furness Abbey in the 13th Century. We had our small display area but also put on a Chapter Meeting, something that the monks had every morning, and two tours of the abbey with Brother Bertram (Stuart). The chapter meeting involved a reading of a chapter from the rules of St. Benedict followed by Brother Earnolf having to flagellate himself as penance for grumbling. People really seemed to like it!

The tours went really well also with many visitors sticking around to go on them. With glorious sunshine all day it really made the day, even if we did get a little warm in our woollen habits!

Take a look at the pictures bellow as well as the advert created to promote the event.


At the end of June we returned to Gleaston for their second family fun day. We set up our camp at the edge of the field and demonstrated through the afternoon. It was a lovely event that we were pleased to have returned to. It was also a very warm summers day, one of but a few we had this summer!

What a lovely if wet time we had at Muncaster this year. We were back for a third year of Living History week and it was a great one! We arrived on the Monday night before our two day stint to find a very wet, marshy field to set up in. Every other year we had attended the field was nice and dry but due to heavy rain this time the site was saturated. We looked around and set our tents up on the slightly higher, dryer land near where we usually set up. We wanted to stay dry when we slept! Eventually we had our camp, this time in a long line of tents, something we had tried before. It proved to work over the course of the two days but we do prefer our usual set up. We met many people over the two days as we demonstrated various crafts, performed our mummers play and weapons display. As always it was a wonderful event to be part of! 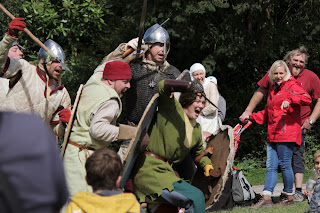 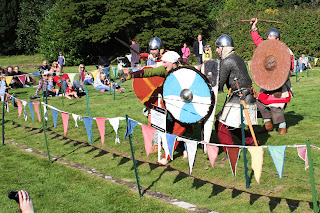 Early in September we were back at Furness Abbey for another Medieval Fair, the third in fact! The sun was shining and people came out in their droves to enjoy a day in the ruins and enjoying the entertainment. We could be found inside our camp working on our crafts or in the display arena performing our weapons display. The day was wonderful and we all had a fantastic time chatting to the public and demonstrating. It's always a pleasure to be at Furness Abbey and the sunshine and interested visitors always helps! We even set up a camera to take a time-lapse throughout the day, this can be seen in the video player below. It certainly shows the amount of people who move through our camp during the day and the bright sunshine. 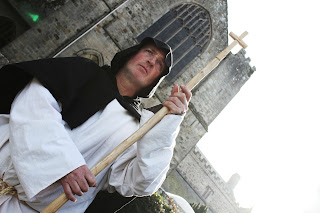 Another new event for us in 2015 was the Magna Carta 800 celebration at Cartmel. It was a two day event to celebrate the 800th year of Magna Carta and it featured ourselves alongside another re-enactment group, Tournee. We showcased daily life and crafts while the they performed large combat displays to the crowds. Together we filled the majority of the display field next to craft stalls and food tents. Over the weekend many thousands of people (possibly 10,000+) visited the village and came to wander our camp and chat to us. We often had large crowds of people around us watching as we demonstrated which put the pressure on but also really made the day special. It was a truly fantastic event and something we are very proud to have been a part of! If this event were to happen again we would be there at the drop of a hat! 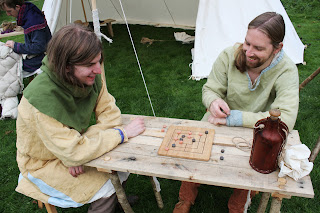 Our first ever October event took place at Ford Park in Ulverston where we were part of Apple Day. We had a small camp set up in part of the  field where we spoke to the public about life in 12th Century Furness. Most of us were peasants but we did have one monk attend to give the religious aspect of the time. There was thick mist throughout the day which gave a certain atmosphere to proceedings and it did make it a little chilly. It was a lovely event and we met many interested people. 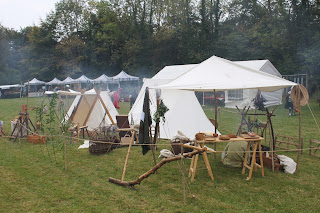 Another October event! This one the day after Apple Day. We were asked to attend a Medieval Fayre in Witherslack to celebrate the Magna Carta. We jumped at the chance and took out kit over for the Sunday event. This event saw us try out another layout for our camp, this time we pitched up in a sort of diamond shape in the centre of the field. This meant people could walk around us with someone always visible to talk to or watch. It worked well. We had a very pleasant and fun day here speaking to various folk about what we do, We even performed our weapons display twice. Something we hadn't done for two events now. It was the perfect event to finish our season off with and we thoroughly enjoyed every minute of it.

2015 has been a fantastic year for Iron Shepherds, we feel like we are going from strength to strength and are very excited to see what the future holds! We have many ideas for the coming year and hope we can share these with you in the near future, roll on 2016 lets see what you bring us!

If you would like to keep up to date with what the Iron Shepherds are doing then why not follow us on Facebook or Twitter You can also check out our website to discover what we do and what we have coming up.
Posted by Iron Shepherds at 10:00