Another year goes by for us here at Iron Shepherds and what a year it has been! From our very own living history festival to old favourites it has been a jam packed year full of fun and excitement.

The Winter, as it tends to be, was a quiet one. We had no events to attend but we did spend the time planning for our coming season and one of the big things we had planned was a brand new living history festival called Life in the Past. We had the idea of creating a series of events and talks which would cover different periods of local history but be held under the umbrella of a larger festival and we set about making it happen.

We soon managed to organise 6 living history events and 3 fascinating talks by archaeologists and specialists including one by a lecturer at Cambridge University. It was soon time to start the festival, which we did come May...


Monks Life | Life in the Past Festival 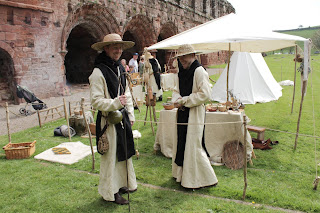 This was the first in our Life in the Past series of events and it was a return to one of our old favourites: Monks Life.

We set up our display inside the cloister of Furness Abbey where us monks would be based all day discussing our daily life. We also had two visiting nuns on site over in the cemetery gate house, women were seldom allowed into the main Abbey complex in the time of the monks so our nuns had to keep their distance.

Brother Bertram also took two tours of the monastic site to give visitors a better understanding of the abbey and the lives the monks led.
It was a lovely day and a fantastic start to our Life in the Past Festival.


At the start of the festival, and throughout, we created several videos to introduce and showcase the events. You can watch all these videos here:

As part of Life in the Past we held several talks by local archaeologists and experts and this was the first one by Dr. Craig Appley all about Prehistoric Furness. It was an excellent talk which really brought to life what the area must have looked like at the time.

There were many folk in the audience who all enjoyed the talk and Craig's delivery.

Medieval Law and Order | Life in the Past Festival 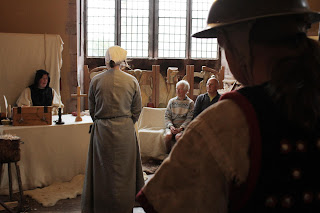 The second in our festival event series took place at Dalton Castle and delved into Medieval Law and Order in Furness. We created part of a court room set in the top room of the castle where our law breaker, held in the dungeon, would be put on trial throughout the day. We also had a few crafts on display to show how the locals were living in the 14th Century.

The trials were the highlight of the day giving visitors an idea of how a medieval trial might take place and for what crimes they might be undertaken. Everyone seemed to really enjoy the trials and we were really pleased with it. 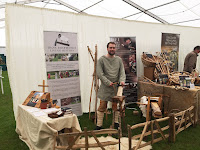 English Heritage invited us once again to set up alongside them at the Holker Garden Festival. This was our third year of attending the festival and as with every year it was lovely! It was super warm in the big tent but we enjoyed chatting to people, promoting our coming events and displaying some crafts.

We were saddened to hear later in the year that this turned out to be the last ever Holker Garden Festival as they have decided to bring it to an end after 24 years. Sad news for all.

Tudor Dissolver | Life in the Past Festival 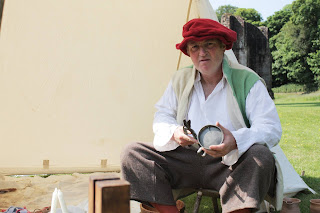 Time for another Life in the Past event, this time we changed it up a bit and went Tudor! This event took place at Furness Abbey and took a closer look at the Dissolution of the Monasteries.

We had a small set up in front of the great church at the abbey where we spoke with people throughout the day and also displayed pewter melting and casting to illustrate the melting of the lead roofs of the abbey.

The Development of Medieval Ulverston | Life in the Past Festival

Another fantastic Life in the Past talk, this time by Daniel Elsworth of Greenlane Archaeology. Dan spoke about the Medieval period in Ulverston from the finds that have been found, although few in number, to the place names of the town.

It was another successful talk with many showing up to watch and listen. 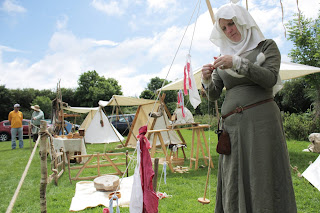 June came and it was that time of year again, time for the Family Fun Day at Gleaston. This was our third time at this lovely event. We set up our Norman camp, displayed crafts and spoke to visitors. It was, as always, a most pleasant day thoroughly enjoyed by all of us. We will be returning to this event again next year so do come along on the 24th June 2017. 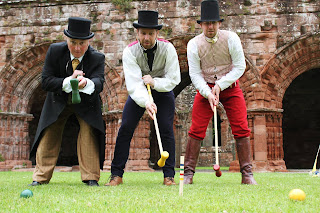 Once again a brand new event for 2016 created by us for our Life in the Past Festival! This time delving into Victorian Furness and the fun and games of the time.

Furness Abbey was our backdrop where we set up numerous tents, lots of bunting and many many exciting games and toys. Families came out in their droves to enjoy the entertainment from the games to the tours to the singing of the Furness Nightingale, a family singing group who are part of the Iron Shepherds.

The day was a huge success and we were are very pleased to say we will be returning to Furness Abbey next year for another day of Victorian Fun & Games on 23rd July! Do come along to experience a truly Victorian day out!

Sea-Kings and Saints: the Furness Peninsula in the Viking Age | Life in the Past Festival

The final of our Life in the Past talks and a fine end it was too! Dr. Fiona Edmonds of University of Cambridge came up to lecture on the Furness Peninsula in the Viking Age. The talk took place at the Forum in Barrow and the room was packed with people all excited to hear what Fiona had to say. The talk was wonderful and was greatly received by all attending.

Victorian Social History | Life in the Past Festival 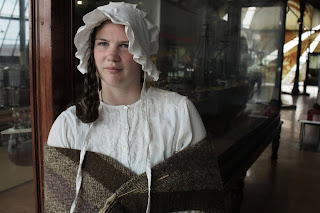 Another chance to showcase our Victorian living history at another Life in the Past Festival event; Victorian Social History! This time we were at the Dock Museum in Barrow, a new location for us as far as events go, and a brilliant day was had by all.

We were based inside the museum in the main dock hall where we had crafts from the Victorian era on display as well as a few games to play alongside singing from the Furness Nightingales. The idea of this display was to give an idea of the lives and jobs of the varying social classes living in the local area. It was a great, if very warm, day which was a huge success! 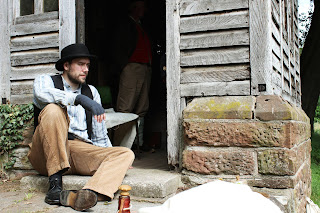 Ah, 1920's workmen! This was certainly a different event for us but a fantastic one! As part of the Life in the Past Festival we had decided to showcase the incredible work undertaken in the late 1920s by local men to underpin and stabilise large parts of Furness Abbey.

We have always been hugely impressed and inspired by the work done by those every day working men and were keen to share their achievements to others. To do this we dressed in period costume, set up shop in the old ticket office inside the ruins of the abbey and performed 3 tours throughout the day. These tours specifically looked at the work undertaken and showed areas of the site where evidence of their work can be seen, or in many cases can't be seen! We had great responses from this event and were so pleased to have put it on.

This event was also special for us as it was the final part of our Life in the Past Festival. The whole festival, from inception to completion, was a huge undertaking. There was so much organisation, promotion and creation required. It took a lot of time for us all and when it came to an end we were all so immensely proud and pleased. It had been a success and that was all we ever wished. We hope that anyone who attended any of our events or talks enjoyed them and learnt something from them.

The Life in the Past Festival will return in 2018!

Back to our normal event schedule and it was time for the annual Medieval Fair at Furness Abbey. 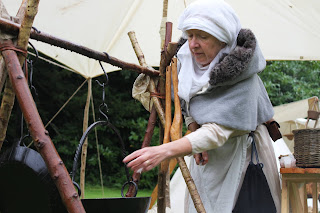 We had worked on a new camp layout and site along with a new Norman invasion weapons display ahead of the event. Friday came and it was time to set up. All was looking great, the camp was the best it has ever looked and we were stoked for the event the next day.

Saturday came and the heavens opened! Heavy rain poured all day long. From about 10 minutes into the event we were already soaked to the skin. As is only right we carried on as usual, or at least as best we could.

Bertram tried to perform on his pole lathe but got absolutely soaked and eventually had to seek shelter. Our Furness Nightingales tried their best to perform from inside one of our large tents and Matilda endeavoured to cook on the open fire while the rain water filled up the stew. It was a real shame. Members of the public didn't want to stop for long and by the time mid afternoon arrived the decision was taken to bring the event to a close. Something or a relief for many of us! It wasn't the most ideal day but hopefully next time it will be fine and sunny... 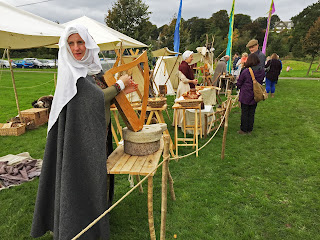 A lovely Norman event to end the year, Apple Day. We attended the Apple Day in Ulverston last year and really enjoyed it, so were delighted when we were invited back this year. We set up our Norman camp and displayed our crafts throughout the day. There was music from Aelswyth, cooking from Matilda and even a spot of bread making!

It was a cool but a nice day too. There were many visitors and we had many lovely chats.

That was it for our fourth year, and what a successful, enjoyable and interesting year it was! But, as they say, no rest for the wicked! We had a Victorian Yard to organise for the Dickensian Festival in Ulverston...


Oh, and also we updated our website during 2016, take a look here - http://ironshepherdslivinghistory.co.uk/
Posted by Iron Shepherds at 13:08