Optical illusion toys were extremely popular during the Victorian period giving fun and excitement to children and adults alike. In this post we will take a look at how to make one of these toys, the thaumatrope.

The thaumatrope is a simple disc with images on each side which, when the disc is spun around, merge into one image. One of the most popular choices for these toys was a bird in a cage image and this is what we are going to use here. 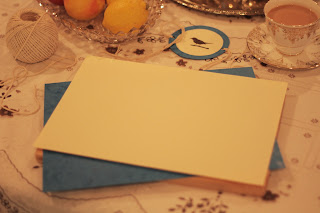 What You Will Need:


Take your paper and mark out two circles with a protractor. Following this mark out a slightly bigger circle on your card and cut all out. This will leave you with two paper discs and one of card.


Draw a bird cage (or whatever you like) on one of the paper discs, trying to keep it nice and central. Once you have finished the cage take your other paper disc and draw a bird on it. Be sure to centre it and measure it so it can fit inside the cage. 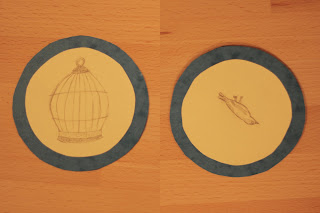 Use a hold punch to create two holes either side of the paper disc, roughly inline across the centre of the circle. This is where we will thread some string. 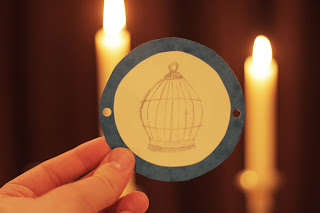 Cut two equal lengths of string. Fold over to create a loop at one end. Thread this loop through a hole in the disc. Take the other end of the string and thread it through the loop then pull it back on itself to tighten around the edge of the disc. Repeat this process on the other side. 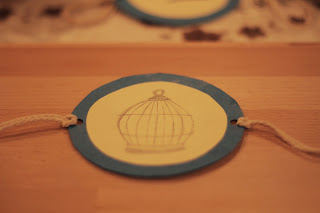 Have a good old play! Hold onto the ends of both stings on either side of the disc, spin it around several times to twist up the strings. Once ready pull outwards and watch the disc. This bird image should appear inside the cage as the disc spins. A simple and wonderful optical illusion!

Email ThisBlogThis!Share to TwitterShare to FacebookShare to Pinterest
Labels: Craft, Cumbria, Iron Shepherds Living History, Life in the Past, Life in the Past Festival, Optical Illusion, Thaumatrope, toy, Victorian, Victorian Fun and Games