It was a year ago this month that Iron Shepherds Living History was established and started as a group!

The establishment of the group brought together old friends with new to reach out further into the world of living history. Many of the members had been part of a youth heritage group that ran out of the Custodian's Cottage, next to Furness Abbey, for many years until it closed in 2006. It was at this project that a passion for history and heritage was born and nourished. It was as sad day in 2006 when the project, after 6 successful years, ended. A lot of us carried on meeting up on Sunday afternoons to socialise and, of course, engage in sword fighting! A further 6 years later, in 2012, many of us were missing the living history and craft side of the project we once attended. It was then that the idea of setting up a group arouse and the rest, as they say, is history. By November we were all in agreement and the Iron Shepherds Living History group was born!

The following year was set to be a successful one for us and a great start for the group: 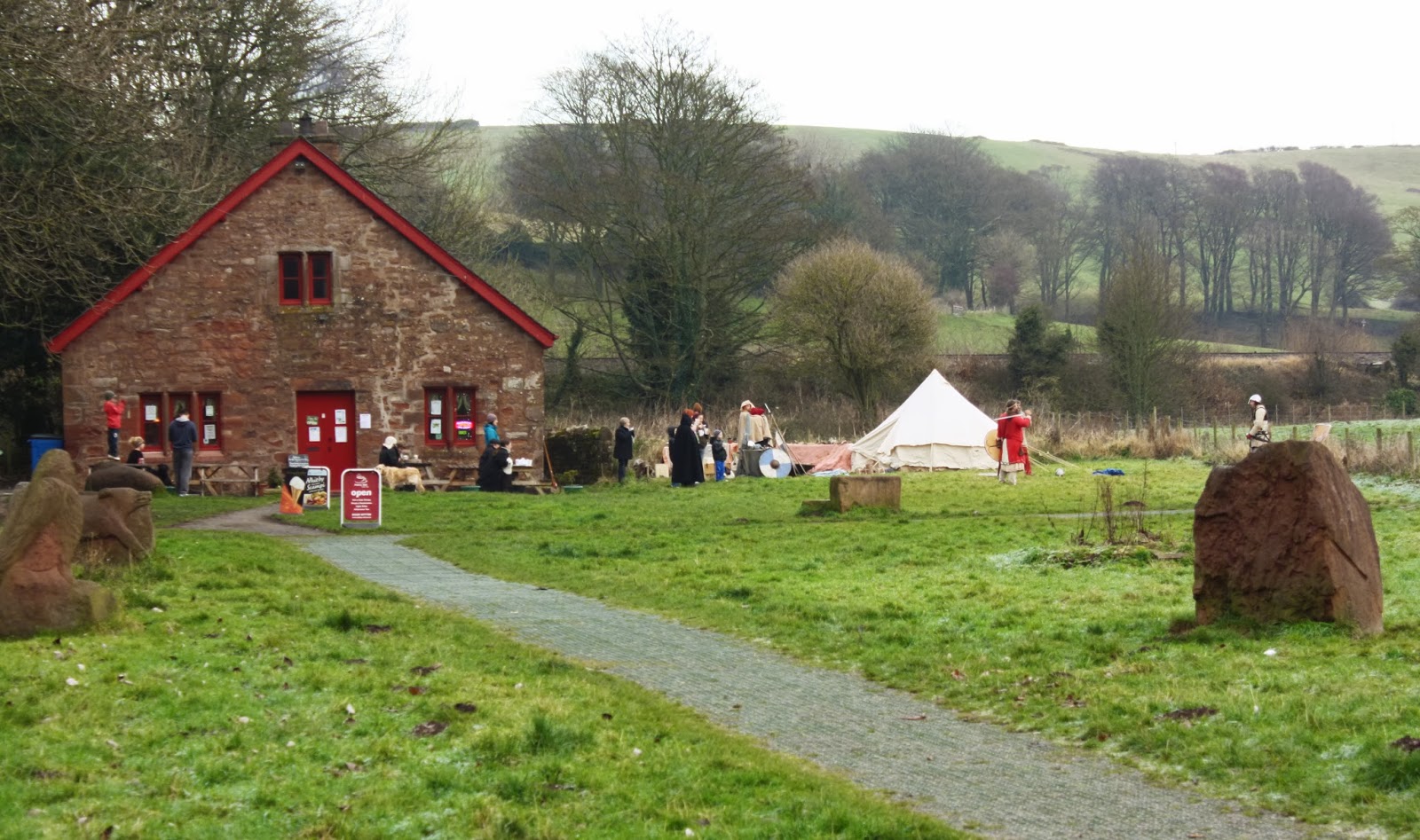 Our first event as the Iron Shepherds was a small affair in a bit of land next to Abbey Mill Cafe (formally the Custodian's Cottage). There was a sense of nostalgia at this event, many of us started at the Cottage and here we were doing our first living history fair since the project ended at the same site we knew so well. Jackie at the cafe was very helpful and allowed us to put on our fair. We set up the big tent and a couple of tables and displayed a some crafts and weapons. It was a very cold and frosty December day but we all had a great time and were pleased to see people coming along to see what we were doing. A humble start that paved the way for our future.

Following this first event we took the Winter to work on our weapons display, our crafts and built on our camp ready for some bigger events come the Summer.

Furness Abbey Fellowship held a Heritage Hobble, where members of the public went on a sponsored walk to raise money for the groups work, and some Iron Shepherds were in attendance to see off the walkers and greet them as they returned. We didn't do any living history on this day but it was great to ease us back into things before the Summer. It also made for a nice photo opportunity with the returning walkers!

Then came something a bit different from our usual Medieval re-enactment, we were invited to take part in the Victorian fair at Wray Castle next to Windermere. Even though we mainly do Medieval we are always open to other periods of history and as many of us have Victorian costumes we jumped at the chance to be involved. Some of us went up to the Castle for three days to wander around in Costume and speak to the public. 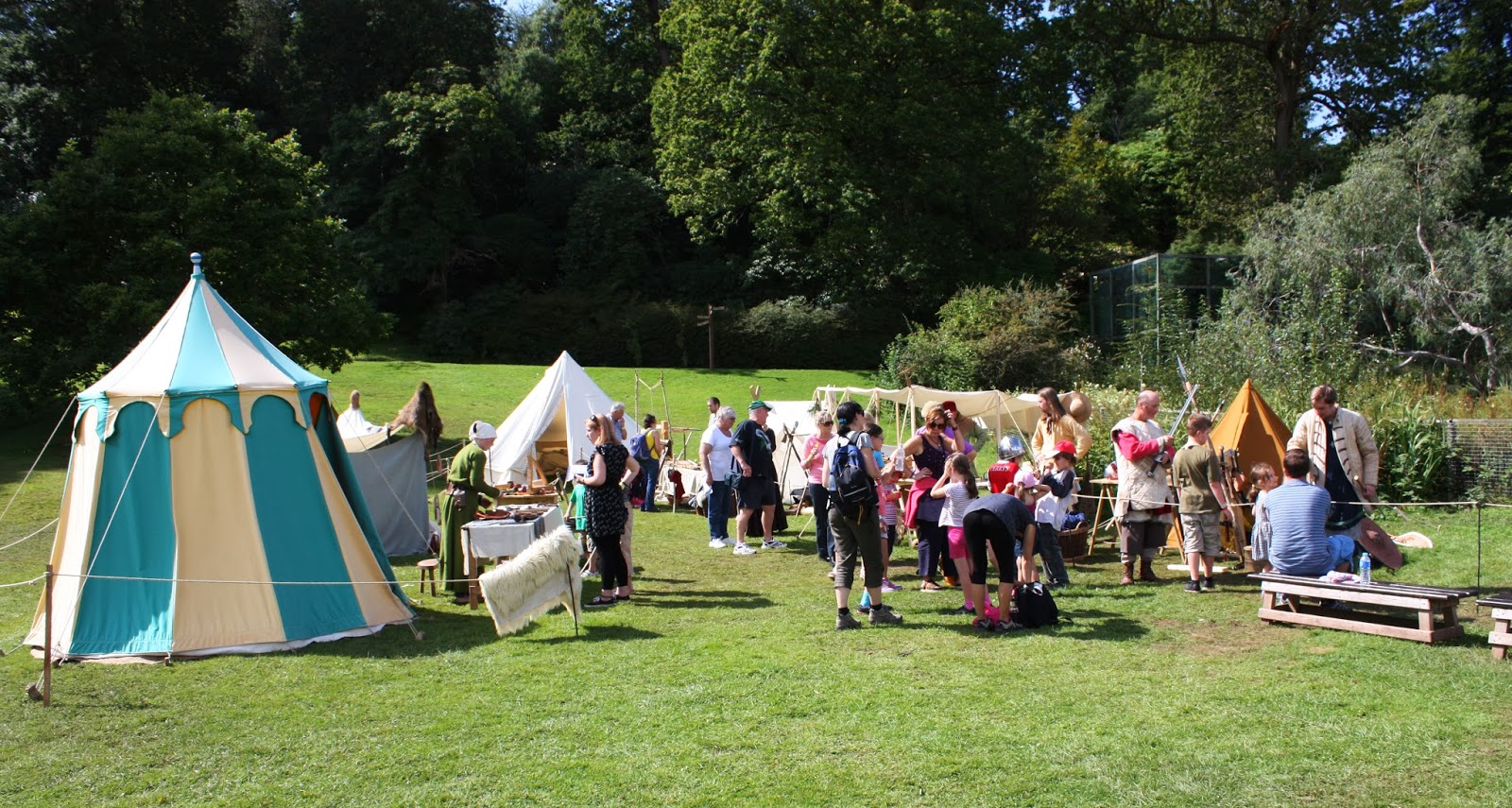 Here we were at our first major event as an established group and boy was it a good one! We had been working hard all Winter and Spring to get ready for this event and when the time came we were more than ready, if a little apprehensive. Friday the 20th and most of us headed up to Muncaster to set up our camp. We laid out our tents, set up our tables and displays then roped out the path running through the camp and we were ready for the next two days. That night we camped out in our tents and, as is always the case in England, it rained. Thankfully all our tents kept out the rain, well mostly, and soon it was morning. We got the fire going, set out the final bits of our displays and we were ready for the public. 10am and the doors opened and soon we had large numbers of people walking though camp looking at our displays and talking away to us. The following day we had even more people come along and see us in action and by the end of the two days we had seen and spoken to some where in the region of 1000+ people! This was a great event for our first big event and we all had a wonderful yet tiring two days and we will be back again next year for more of the same! 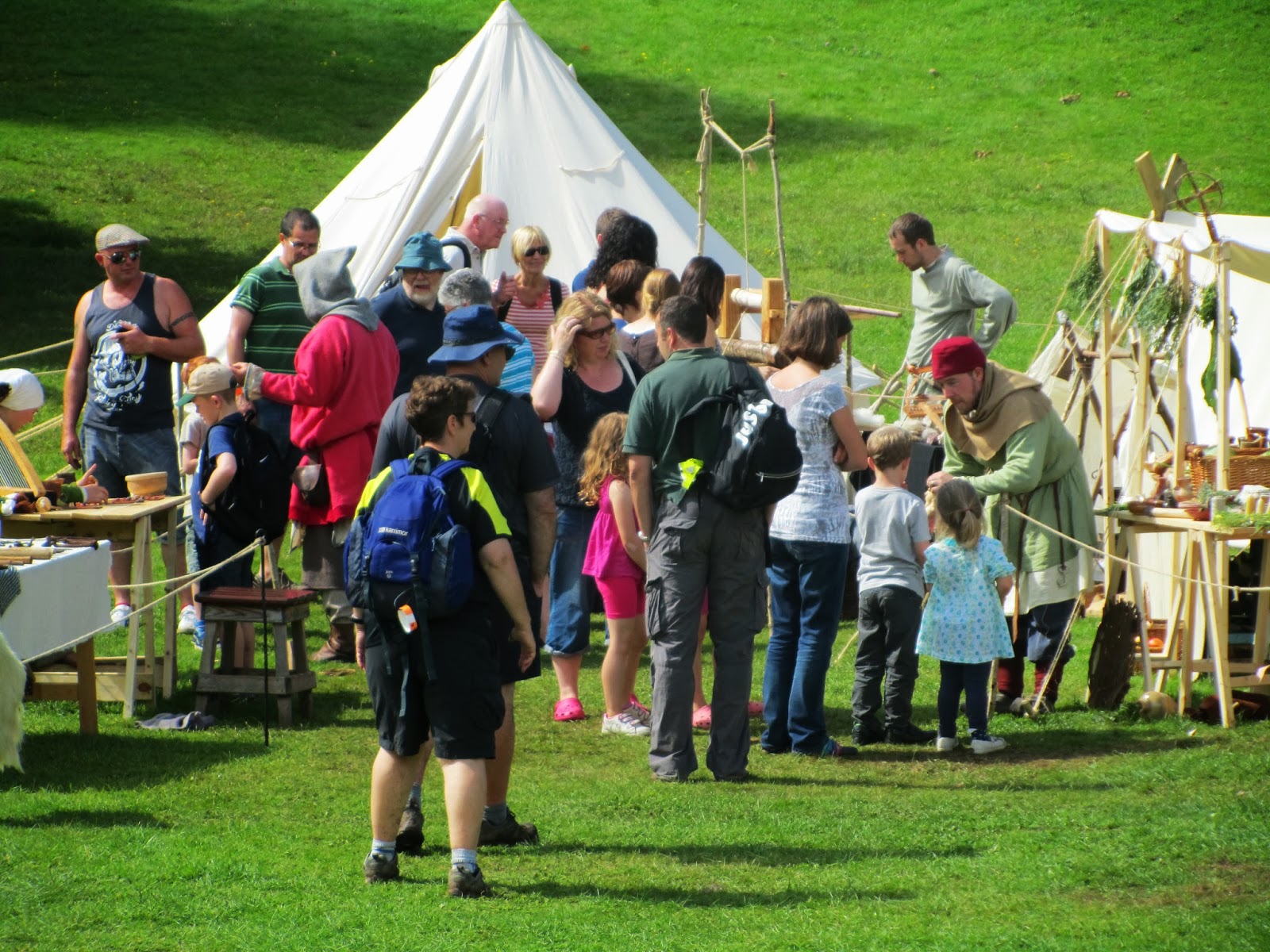 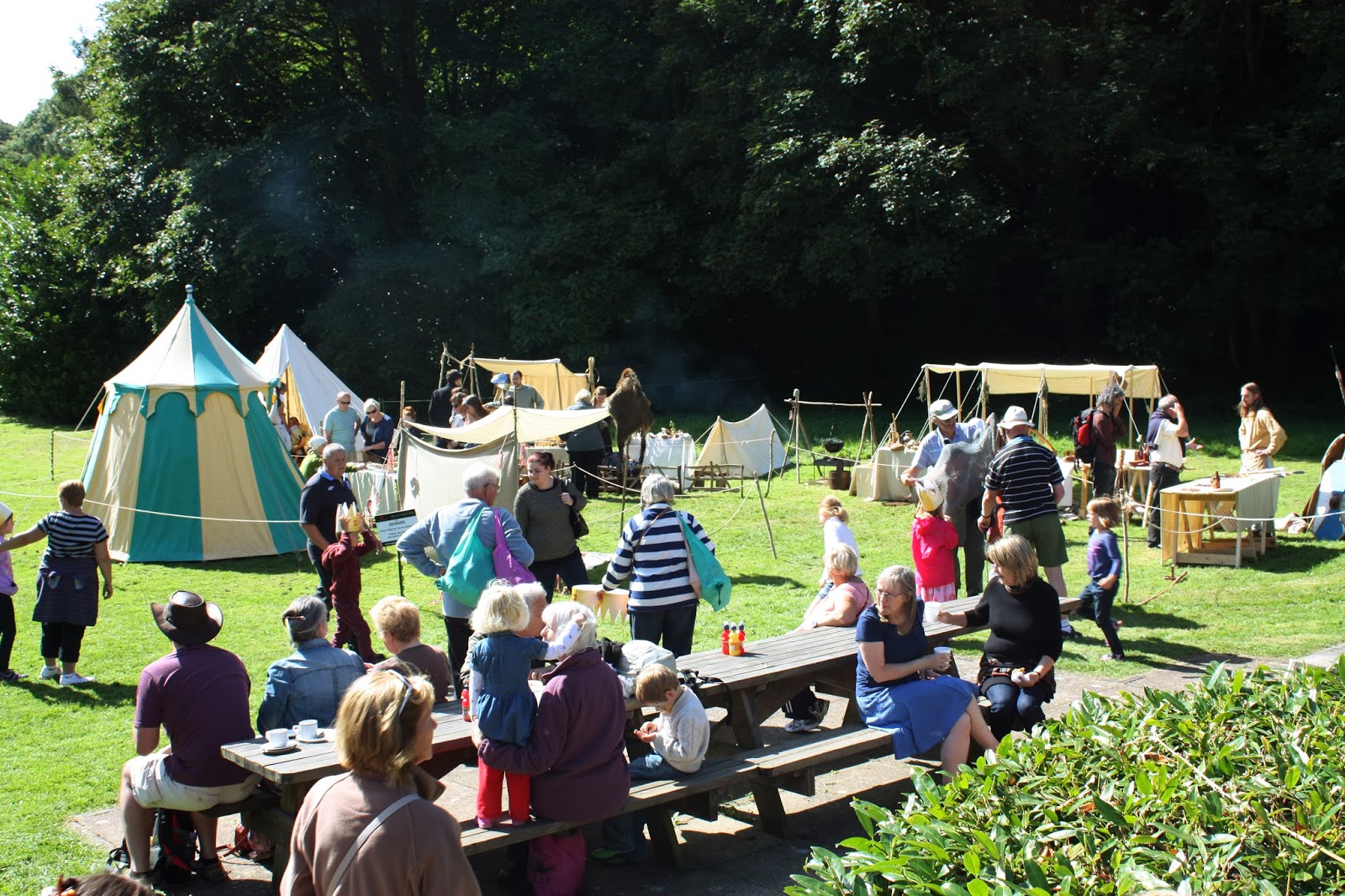 7am, 31st August 2013 and we were down at Furness Abbey with all our kit ready to set up for what was to become our biggest event yet! The rush was on to get fully set up and ready for opening at 10am. We pushed on and managed to be ready just in time. Furness Abbey Fellowship had organised the event with Iron Shepherds being a pivotal part of the fair set up right at the entrance of the Abbey. As soon as the doors opened people flocked into the site and everyone was filtered through our camp. The flow of people was constant throughout the entire day with no time for a break. We spoke to so many people and we hope we taught something to those who came and provided some entertainment. We ran our weapons display a few times throughout the day to large crowds of people, luckily any of us killed during the display came back to life to carry on for the day! The sun was blazing all day long, which was great but bad at the same time. Great because sun is always better than rain but bad because we were so hot! Luckily we kept well hydrated! We had so much positive feedback though out the day, and after the fact too, that we will be back again next year. By the time the day had drawn to an end we had, had over 1500 people through the camp! It was a fantastic day that worked us to the bone but we wouldn't change it for the world! It really solidified what we wanted to do and that what we were doing was good, wanted and enjoyed. Everyone went home with a sense of pride and joy at the end of the day looking forward to what was next!

After this we took a bit of a break to rest up and start looking to the future. 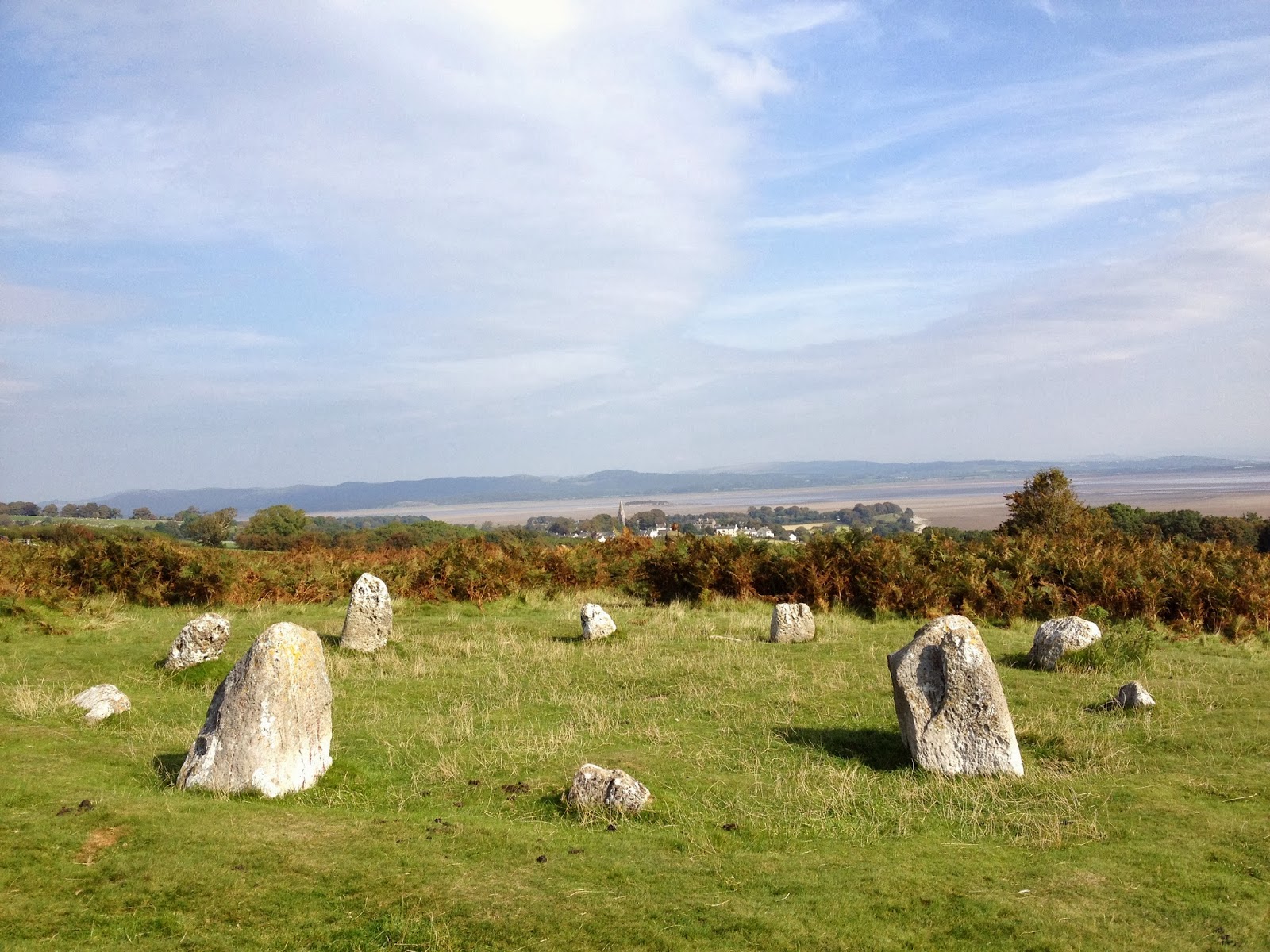 This day saw the launch of the Furness Hidden Heritage blog, a blog dedicated to showcasing the hidden and lesser known heritage sites of Furness. The blog utilises text and pictures to show and tell others the history of a variety of historic sites. It also brings to light hidden areas of Furness including lesser known areas next to well known sites. The blog launched to positive feedback and to date has reached nearly 2000 people and counting! If you want to read the blog then you can find it here - furnesshiddenheritage.blogspot.co.uk

We then were invited back to Wray Castle for something completely different! 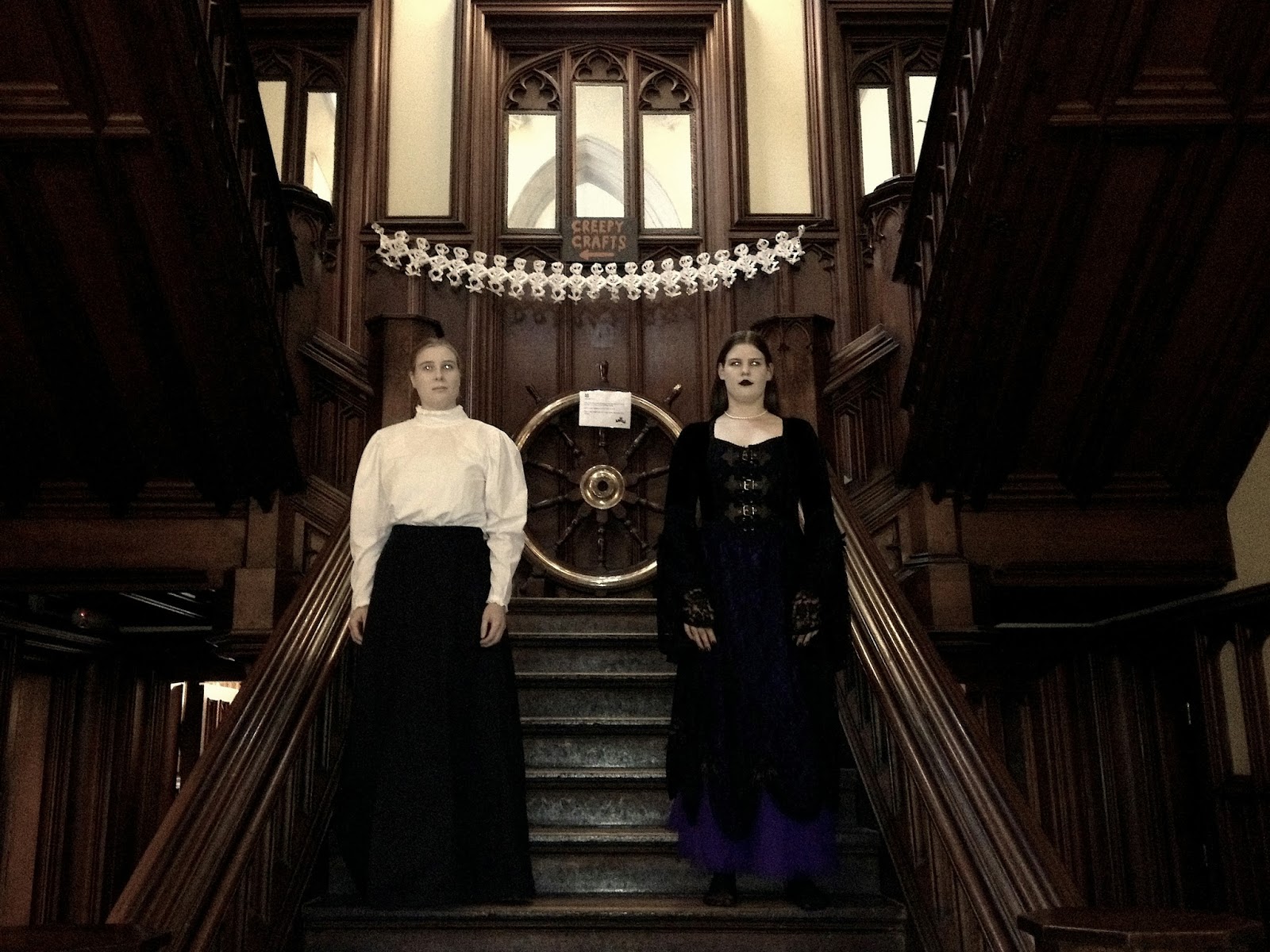 Wray Castle kindly invited us to help out at their Halloween celebrations over October half term being spooky and creepy around the Castle. Many of the group were interested and were quick to confirm their involvement. We went up on both the weekends as well as Halloween itself and spent our days wandering around the Castle being as ghostly as we could be. It was certainly an interesting week and was of course great fun! 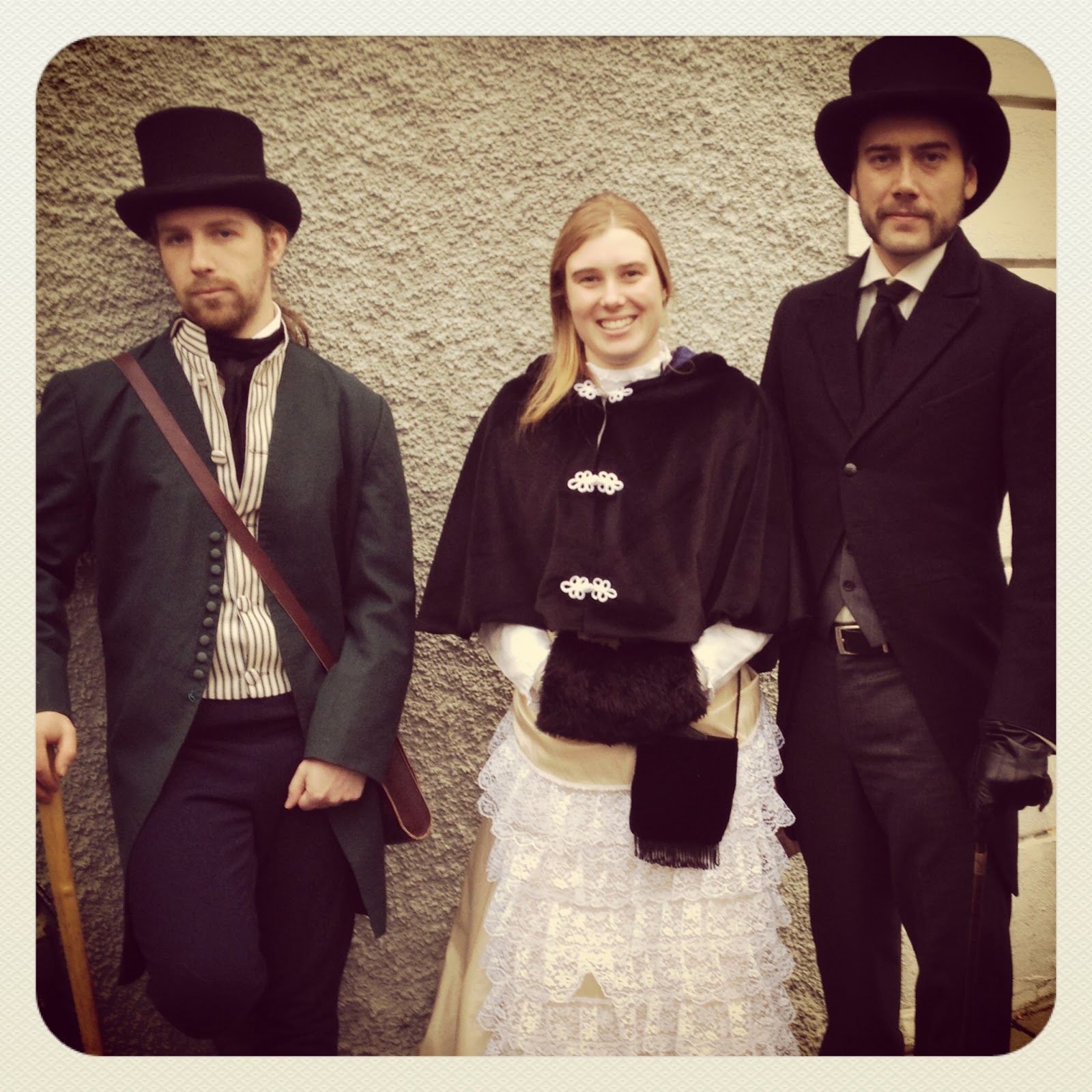 The annual Dickensian Festival in Ulverston is an event we have enjoyed for many years and this year some of us decided to go along in costume to enjoy it once again. We donned our finest Victorian costume and headed out into the crowds to look at the stalls and enjoy the entertainment. It was a great event as always and we had a lot of fun wandering around in our costumes having our pictures taken every now and then! Non of us won the best costume competition but you can't have everything can you!? Nice to see Queen Victoria out and about too!


That brings us to the start of our second year as a group and what does the next year hold for us? Well this weekend, 1st December, we will be setting up a small camp at the Furness Abbey Fellowship Christmas Fair at the Abbey Mill Cafe. This will be a small little event for us to show our faces and spend some more time in our Medieval get up. Feel free to come along and say hello as we will be happy for a chat. Other than that, well, wait and see! We have some great and interesting ideas for the coming year including returning to Muncaster and Furness Abbey!

If you want to keep up to date with what we are doing and what we have coming up then follow us on Facebook here or check out our website here. We are looking forward to see what the future holds and hope we can provide some new and exciting things for you to enjoy!